HARPER CUTHBERT HAS BEEN GIVEN TWO MONEY CAN’T BUY GIFTS

Harper Cuthbert from Stockton on Tees, Durham, who is celebrating his 11th birthday today has a love of theme parks and rides and was desperate to spend his big day visiting Fantasy Island. However, with the current lockdown meaning the theme park is closed until April 12, this wasn’t possible.

Luckily for him, his superhero dad, Lee Cuthbert, came to the rescue with the help of Paige Harris at Fantasy Island. Together, they have been able to give him two extra special, money can’t buy gifts to make his lockdown birthday one to remember.

They sourced an unusual coin operated amusement ride featuring a character called Modhesh, which he first played on at the resort, from the Middle East, which was delivered secretly and hidden in the family’s garage until his birthday arrived today. This, along with the official keys to Fantasy Island, have made Harper the happiest boy in the world today.

Speaking of Harper’s birthday, Lee Cuthbert said: “Harper is a massive fan of theme parks and loves all types of rides, especially the coin operated ones.

“He came across the yellow character, Modhesh on YouTube a couple of years ago and would spend hours watching videos of the adorable mascot.” 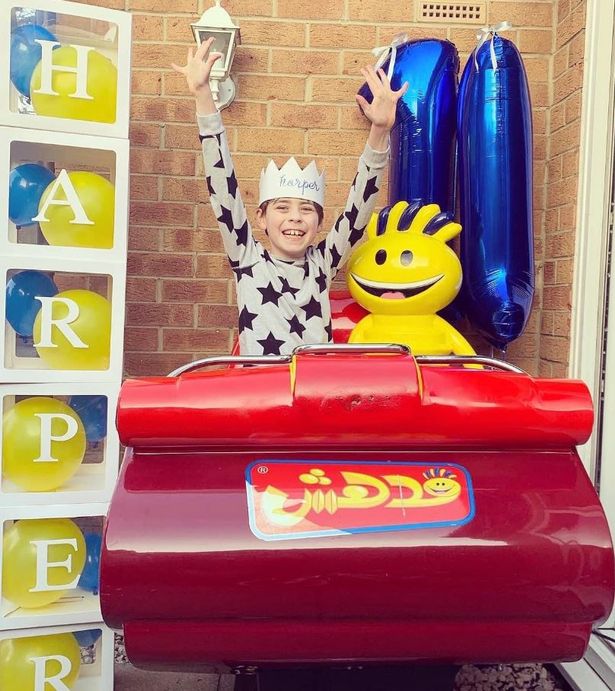 The character is part of the event which is based in Dubai named ‘Modhesh World’ which houses rides, games and shows for children in the Middle East.

The family have yet to visit Dubai, however Lee spotted that the Modhesh ride was also available at Fantasy Island, which prompted a family staycation last year, with the whole family staying in one of the park’s holiday homes.

Speaking of the moment Harper met Modhesh, Lee said: “It was truly magical moment when they met, Harper was smiling from ear-to-ear. His nine-year-old sister, Honey wanted to go and see the other rides, but it was impossible – Harper just didn’t want to leave Modhesh.”

The Cuthbert family managed to find another two Modhesh rides at Fantasy Island and Harper has been desperate to go back ever since his visit pre-Covid, pleading with his parents to take him on his upcoming birthday.

Having already had teddies specially made of Modhesh for Christmas, Lee decided to post on coin-operated rides fan pages on social media to see if he could buy any other merchandise to keep Harper’s birthday dreams alive.

Fantasy Island spotted his post and Harper’s love of Modhesh rides and approached Lee, offering Harper a generous birthday gift of the ride itself to make up for not being able to open for his 11th birthday.

“At first I thought it was a scam. I couldn’t believe it! I’m still in shock now. Paige at Fantasy Island has been amazing. She has made my little boy’s dream come true.” said Lee.

Paige Harris, for Fantasy Island, said: “Having heard of Harper’s story and his love of Modhesh, the team at Fantasy Island really wanted to help the whole family celebrate his special day by gifting him his very own ride.

“But we didn’t want to stop there, we knew Harper was disappointed with not being able to visit us on his birthday this year, so we also gifted him the official keys to the theme park to make sure he can visit whenever he wants to when we reopen.”

Fantasy Island is set to safely reopen its outdoor attractions, in line with Government restrictions on 12th April 2021.