Fantasy Island, located in Ingoldmells on the East Coast of England, has done Lincolnshire proud by winning a bronze award in the ‘Best Theme Park for Families’ small category at the UK Theme Park Awards 2021. A prestigious prize in the leisure and travel industry.

Beating the likes of popular UK theme parks including Adventure Island, Diggerland and Oakwood Theme Park, Fantasy Island impressed both the expert judges and the public with its family experience overall package of offerings.

The shortlist for nominees was picked by six individuals who are esteemed in the industry, before voting was opened up to the British public. 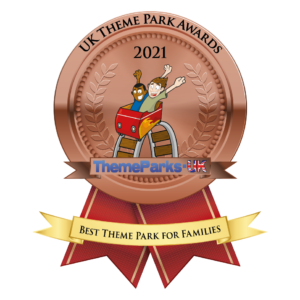 James Mellors Senior, Owner of Mellors Group, said: “We are absolutely thrilled to have won a bronze at the UK Theme Park Awards 2021. We’ve introduced a variety of new attractions this year which cater for the whole family, so we’re really proud of this achievement.

“I also want to give a massive thanks to the Fantasy Island team for all coming together following a difficult year to deliver a fantastic experience for every visitor. The theme park would not have been able to win this amazing award, or be nominated in the other six categories without them.”

Fantasy Island is home to over 30 rides and rollercoasters, Europe’s largest seven-day market as well as luxury holiday homes. The theme park has added the Spinning Racer ride to its outdoor offerings this year which offers accelerated spins, uncontrollable belly laughs, and extreme thrills. Plus, a variety of indoor attractions will be opening soon including Harrington Flint’s Island Adventure’s and the exhilarating quest, The Guardian.

And as Halloween season approaches, Fantasy Island is gearing up to host its annual spooky spectacular, Fear Island. This year is expected to be bigger, better and even more scarier than before, with four brand-new ghoulish interactive scare mazes popping up around the family theme park, along side a spectacular fireworks display.

Combining fun and fear for the whole family, Fear Island’s month of scares kicks off from October 9th until 31st October.

Do You Dare Visit Fear Island?